Can experienced workers be supervised?

EDMONTON — Whether it’s dealing cards in a casino or working in oil camps in northern Alberta, addiction counselor Justin Buffalo turns heartbreak into stories steeped in comedy and urban legend.

Buffalo, 34, was raised by his grandmother on the Samson Cree First Nation south of Edmonton. He had a quiet childhood in an isolated part of the reservation, he says, and spent most of his time reading books given to him by two of his grandmothers.

Buffalo is in the second year of Audible’s Indigenous Writers’ Circle, a six-month workshop and mentorship program for First Nations, Inuit and Métis writers in Canada. The audiobook subscription service company launched the program to support emerging Indigenous writers and provides mentorship and learning opportunities to help participants tell their own stories.

There are 19 writers in this session. They are eligible for a $1,500 scholarship to support their participation in the program. Audible does not publish their stories but helps writers refine and elevate their work.

One of Buffalo’s biggest inspirations is “Angela’s Ashes,” a Pulitzer Prize-winning memoir by Irish author Frank McCourt. Given by a teacher, Buffalo says he drew similarities between the book and his own experiences.

Although Buffalo grew up in Samson Cree First Nation, he resided in Edmonton for many years. While working in a casino and camp kitchens, he also wrote local environmental reports for the First Nation.

During the COVID-19 pandemic, Buffalo took to journaling and writing stories that reflect her own experiences. He also took the opportunity to go back to school to become an addiction counselor.

His time in casinos and camps paved the way for addiction counseling. Although Buffalo does not write about his clients, he uses their experiences to illuminate the perspectives of his work.

“It gives me another perspective on certain things.”

Indigenous author Clayton Thomas-Muller has been Buffalo’s mentor for the past several months. Thomas-Muller is known for his memoir “Life in the City of Dirty Water,” which is a national bestseller and a CBC Canada Reads finalist.

He is a member of the Mathias Columbus Cree Nation in Treaty 6 territory in northern Manitoba, but grew up primarily in Winnipeg, where he currently resides.

“Justin is an incredibly deep and creative soul,” says Thomas-Muller.

“A true representation of the moccasin on the left foot and Adidas on the right. Having lived between the ground floor and the big city, he is rich with the perspective that this kind of dichotomy brings.

Thomas-Muller says he chose Buffalo as a candidate for the program “because its history and its potential really touched me.”

He says he and the program’s other mentors shape it to match the needs and interests of writers.

“This type of program didn’t really exist when I started,” explains Thomas-Muller. “I’m grateful that Writers Circle is a place where we can support those who are coming now.”

Buffalo is currently working on a pseudo-memoir called “Eagle Whistles and Elders Echoes”, about a man who doesn’t know he’s a bear and tries to get home for his brother’s wake. Buffalo says the book is dark, but strikes a balance between levity and humor.

“It’s about dealing with the loss and the unique hardships of just trying to get through the day,” Buffalo says. “I wanted to write something that has a modern myth vibe.”

Buffalo says the bear’s use is primarily for comedic effect and was inspired by the Duck Man in English author Terry Pratchett’s “Discworld” series.

“I use it as an excuse to derail the conversation and change the tempo.”

Buffalo says he enjoys learning to hone his writing and learn more about the industry through the program, which “really gets the ‘natives’ into the circle of native writers.”

“I’m really proud of what I’m doing right now,” says Buffalo, “in whatever direction it takes. » 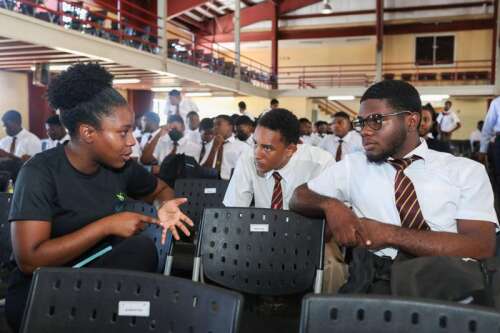